Recently, I went on a voluntary fat loss phase with the RP Diet Coach App. My goal was to get under 200 lb for the first time in quite some time! I started at a bodyweight of about 209 lb.

My training consisted of the Male Physique Training Templates 4x/week, BJJ training about 3x/week, and some form of cardio each day.

This was one of the easiest fat loss phases that I have ever run because I was coming off about two whole years of maintenance dieting at about 210-212 lb. Which brings me to my number one tip:

1) Run a prolonged maintenance period. Running maintenance for many, many months (over two years, in fact) made this a particularly easy fat loss phase.

On my maintenance period, it was not unusual for me to have pizza once per week with my family/kids. We weren’t shy about going to get ice cream every now and again either, especially in the summer months down here in the Carolinas.

This flexibility made the first couple of weeks of dieting very easy. I knew that with minimal changes I could lose a few lb right out of the gate. All I needed to do was ditch that relaxed mindset for a bit.

Don’t overlook the importance of maintenance. Lean towards longer on maintenance whenever possible, especially if you value long-term results. The psychological break of maintenance cannot be overstated and it actually made me want to diet. Think about that for a second!? More maintenance means you might actually look forward to a fat loss diet and being a bit more particular with your food intake! 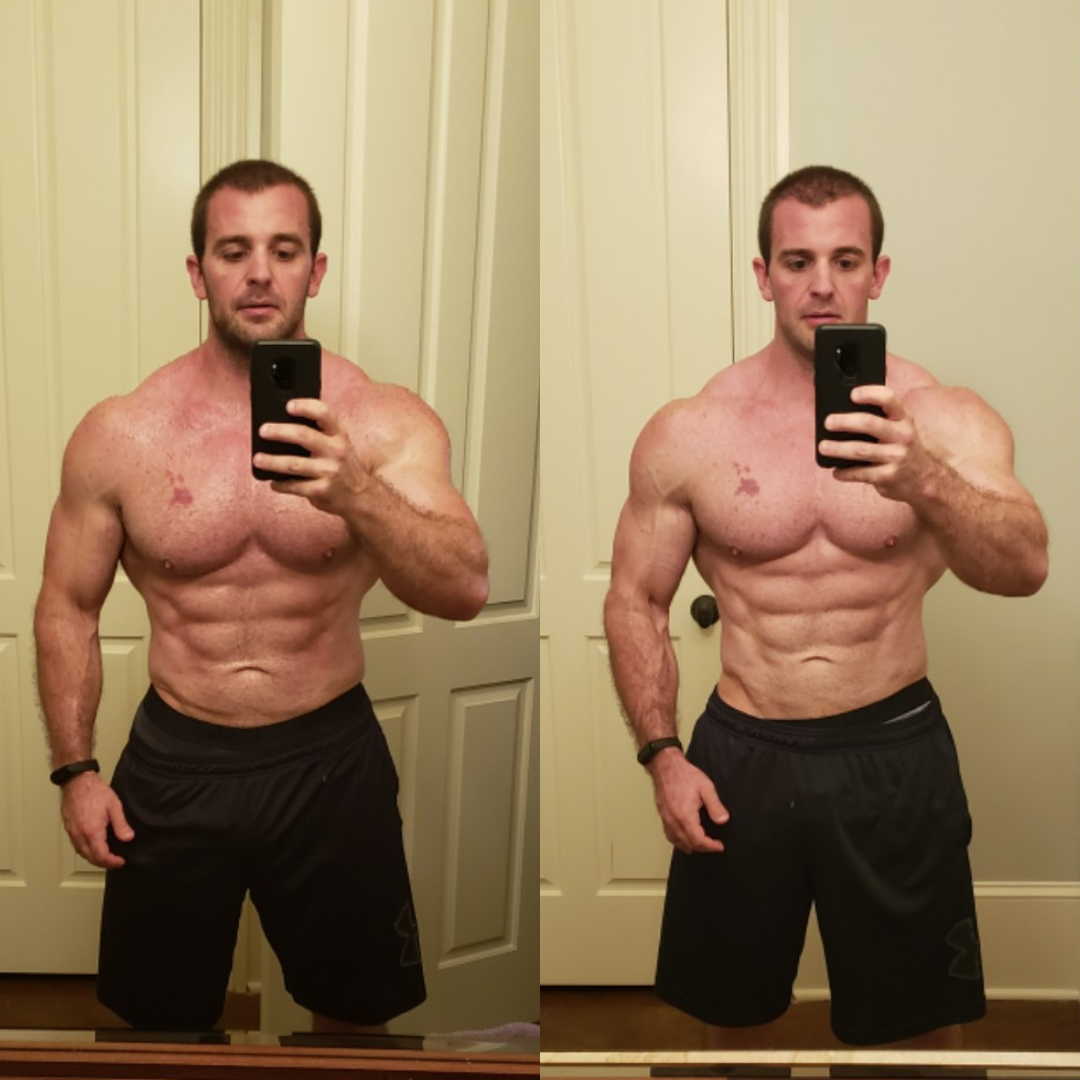 After the first couple weeks of my diet my weight loss stalled out a bit. Per the advice of Dr. Mike, I had purchased a step tracking watch to monitor my output on this diet. I started with a modest goal of just getting in 8k steps per day. After that initial first two weeks, I decided to bump it up a bit to 10k. This solved my weight loss stalling and even without making any nutrient reductions in the RP Diet Coach App, my weight loss got right back on track.

Having a step tracker makes you aware of how active or inactive you are so it’s a very valuable tool. It acts as a gentle reminder to get up a bit more and move around more. It was not uncommon for me to park further away from the store in order to get in a few more steps thanks to the awareness of how much (or how little) I was moving on a given day. As a bonus, I was even more willing to play with my kids outside (playing catch, baseketball, etc) because it meant I’d easily add in more steps and have a good time with my kids. That’s a win/win!

3) Organize and plan ahead for any travel. Traveling doesn’t need to be a deal breaker!

Throughout my 6-7 week fat loss phase, I traveled to Michigan over Labor Day weekend, spent a couple of nights away for my wife and I’s 10th Anniversary, and attended three different football games (two Carolina Panthers and one Michigan football), and had to dine out at least 10 different times in total. Rather than stressing out over these awesome opportunities, I just took the approach to make smart decisions.

When dining out, I would get some type of lean protein (usually the smallest steak or chicken that they offered that would usually be about 6-8oz of meat). Along with that, every restaurant had some type of seasonal or steamed veggies. That combo was pretty dang close to my macros from the RP Diet Coach App. For carbs, I’d usually have a little bit of bread at the start of the meal and given that I couldn’t track/weigh this I would assume that the piece of bread (or two) filled up my carb allotment. By doing this, I was able to enjoy many meals out with my family and friends without it being a burden on them or sacrificing progress on my voluntary diet.

I would mark all of these meals as “over macros” in my app just because the fats from the restaurants are almost always more than you think. If I absolutely needed to, I would then eat a little bit less carbs or fats at the next meal, but this was pretty rare as I knew that my eyeballed amounts at the restaurant were pretty decent.

Getting good rest on a diet is particularly important because you are already running on less total energy. Keeping sleep solid allowed me to continue to recover and feel ready to face each day of dieting with less stress and fatigue.

5) Keep lifting volume up. For lifting, volume is key.

The Male Physique Training Template workouts were hypertrophy oriented throughout. The focus was on keep my training volume up high vs using heavier weights. Most of my training sets consisted of reps between 6-15. The volume progressively increased each week throughout the mesocycle, which also aided in not needing to lower my nutrients in the app for much of the diet. I was increasing total volume and as a result was burning more calories. So just when my weight loss might have slowed down, this extra calorie burn helped prevent that. This was an added benefit to the muscle-saving progressive overload (more volume each week). Volume increases were not huge jumps, but slow increases by a few sets per workout each week. 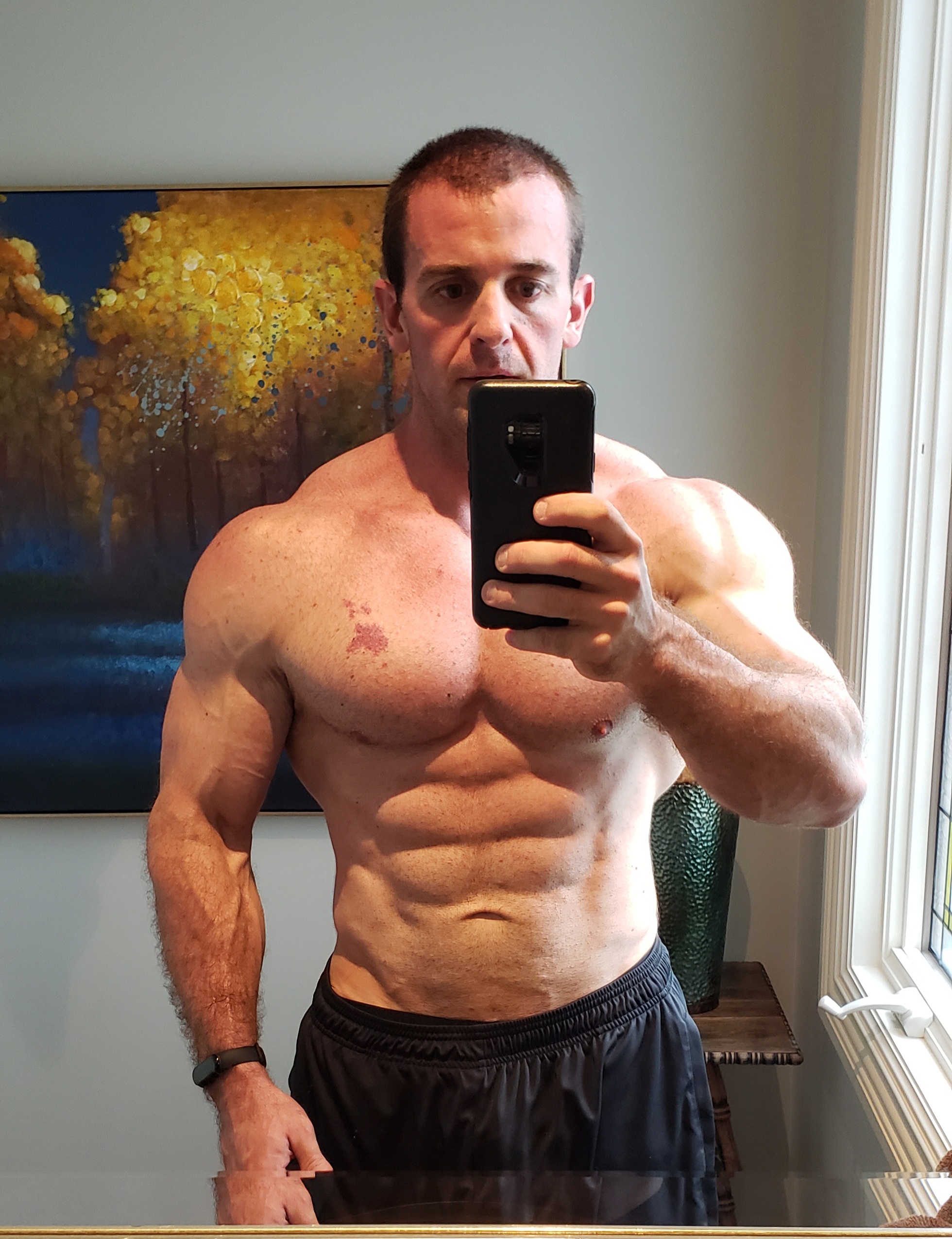 6) Keep the rest of your normal routine and adjust for fatigue. I stuck to my BJJ training schedule.

My normal routine of training BJJ was 3-4x/week. For all but the last two weeks of my diet I kept to 4x/week. Since my training volume was getting very high for me the last two weeks of the diet, I scaled back my BJJ to only 3x/week and focused more on technique vs live rolling. The benefit of one less class each week and a lower intensity of training is that it prevented injuries. Had I kept the volume and intensity of BJJ higher along with the added training volume and the caloric deficit, it would be asking for an injury that could derail my training for a month or longer depending on the severity. Even though I would have liked to train more the last couple of weeks, playing it safe and smart was the better long-term option.

The first couple of weeks of a diet are typically easier than the last couple. For this reason, I periodized my caffeine intake. When I knew that I needed caffeine less, I used less. When my food intake was higher and the training was less intense I kept caffeine low. As the mesocycle progressed and I got into the final two weeks of lifting, I added in a scoop of pre-workout. This allowed me to be a bit more sensitized to caffeine when I needed it . It’s for this reason that we recommend not cranking caffeine consumption year-round. There are likely times to taper it down a bit.

We want supplements to be the most effective and because of this we want to use them a bit more strategically whenever possible.

8) Healthier options are more filling. I eat healthier on a fat loss diet.

As weird as this one might sound, I tend to eat a lot “healthier” when on a fat loss diet. Since hunger will go up a bit, I tend to make better food choices at meals. This means eating quite a bit more fruit and veggies since those are more filling.

When running a prolonged maintenance phase, it’s easier to fall into the habit of taking the easy way. By this I mean I tend to reach for more protein shakes/bars/jerky for protein sources and I have less food cooked ahead of time. I do use Trifecta often to help with that, but sometimes laziness gets the best of me and in the afternoon when I have work calls or meetings it’s easier to reach for the quick/convenient snack to make up a “meal” vs preparing something that will be a bit more filling.

9) Get the momentum started and ride it to success.  Momentum is key.

I talk more about this idea here. The big idea here is something that I noticed with my daily step count. If I was sitting around more, particularly watching TV (hey, it’s football season!) I found that getting up when I was a little more tired seemed exponentially harder. I found that once I was up and moving around it was so much easier to get in my steps and keep moving.

The same applied with my daily cardio after already having lifted (usually running 1 mile or rowing a 2k). I wouldn’t always feel that great, but a minute or two into it I would feel a lot better and would never regret it once I was done. I can extend this into BJJ classes as well. When fatigue is rising later in a mesocycle, it is easy to convince yourself that you don’t want to or need to attend class, but once you’re there and moving around you will almost always feel that showing up was the right choice. It’s tough to overcome that inertia of sitting still, so try and keep that in mind if you can get up and moving around you will likely thank yourself later.

Since I had an extended maintenance period before this diet phase and my diet was only six weeks, I have very little to no cravings/urges to eat a bunch of junk food now that the diet is over. As I type this, I’m a couple of days after the completion of my diet and my “fun” meal yesterday while watching football was a rotisserie chicken and a container of pre-cut fruit. That was my celebratory meal 😊

No need to go crazy overboard with some huge “free” meal with pizza, wings, cupcakes, etc. I didn’t overextend myself on the diet and as a result my mental diet fatigue was quite low. This means I am having an easier time transitioning to maintenance and an easier time sticking to my maintenance weight of around 201 lb.

This is something that my colleagues Dr. Melissa Davis and Dr. Mike Israetel talk a lot about. Don’t go overboard right after your diet ends, just add back some more normal food and enjoy that. Chances are, you’ll feel quite satisfied and you won’t get into that rebound effect of blowing back up after the diet is over. My plan is to stick with this for another week or so until my birthday and then have my first real “free” meal where I can have cake/ice cream and whatever else I want and by then I’ll be almost two full weeks in maintenance and fully in charge.

It’s tough to use a long-term time horizon when planning, but if you want to be as successful as you can I would highly encourage it.

I wanted to write this article to show that we walk the walk and talk the talk. We don’t just talk about these things on the RP Podcast, YouTube channel, Instagram, etc. We actually do live by these same strategies that we recommend and if you can follow those we know that you will be even more successful.

If you want to follow along with my diet journey and maintenance, give me a follow at @nick.shaw.rp on Instagram and don’t be shy to drop me a DM. I’d love to chat more about how I can help you out and am always up for ideas that we can discuss on the RP Podcast.