Any time an impressive lifter or bodybuilder posts a certain feature of their approach to diet or training, be it a meal plan, a split routine, or a video of a certain way to perform an exercise, criticism is inevitable, especially from the fearless online community of anonymous posters.

So what's the deal? Is the "it works for him" defense valid, hot air, or somewhere in between?

1.) Humans are incredibly similar in basic anatomy and physiology.

This means that "what works" for one person will almost certainly work for another, so long as the dosing is adjusted (how many total squats are done, not whether or not squats or leg presses are best) and special considerations are taken if/when needed (someone might be doing half squats only because of an injury, not because they think its best).  That being said, there is a very powerful consensus on general approaches to training, diet, supplements, and all other aspects of athletic enhancement. IF the athlete in question is in CLEAR VIOLATION of any of these fundamental basics, then his approach is almost certainly not "working for him" but rather he is benefiting in spite or beside it. Examples of basics include:

So just because a pro bodybuilder is using 1/4 range of motion and only doing isolation moves, that does not mean "it works for him" and you should try it. Especially in bodybuilding, most high level guys GOT to where they are in size by doing compound full ROM movements, and are so beat up from poor fatigue management or exercise technique errors (and just aging and years of training) that they often have few choice BUT to train in a rather suboptimal manner. But since you're only seeing them as they are, and not what got them there, it's important to avoid making the "well it works for him" mistake.

Within the nitty-gritty of applying the basics, sometimes it DOES actually "work for him." A history of injuries can alter exercise technique. Sometimes the lifter would love to do a movement the "right way," but must trade off proper technique to avoid aggravating an old injury.

Sometimes people's different limb leverages need exercise modification... short armed deadlifters often "squat" their deadlifts out of the hole, which can look wrong to the untrained eye, but is the best modification if you have alligator arms.

Some bodybuilders are so genetically gifted, they do almost no cardio to get in shape. Dexter Jackson (former Mr. Olympia) did no cardio for the first decade of his career. He just cleaned up his diet for 6 weeks and BAM! Contest shape! 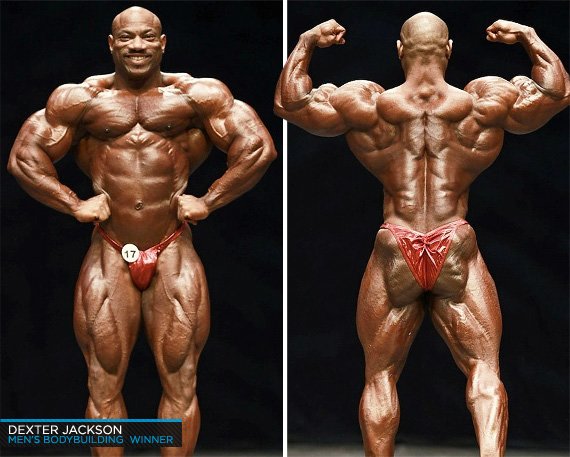 (Dexter Jackson, pictured above, is a genetic anomaly with his conditioning as he does very little cardio to look like that!)

Now, because you may or may not have those variations in common with the lifters in question, it pays to be very careful before applying the new trick or approach they are using. Looking deeper into the matter and trying to find out WHY the athlete is doing what they are doing is almost always a good idea, rather than just applying the new trick right away.

So, does "well, it works for him" pass the smell test? MAYBE. If a technique or diet manipulation passes, the basics test, it will probably work for you too (#1). If it does not pass the basics test, but passes the meaningful variation test (#2), then it is a good idea for the athlete in question to do, but may or may not be a good thing for you to try, based on if you have a similar situation. If, however, the new trick passes neither test... it's probably just one of a million stupid things gifted (or just experienced and hard working) athletes do that add little value, add no value, or actually subtract value. Because if both tests are failed, a good retort is "maybe they'd be EVEN better if they didn't do it that way." Even Ronnie Coleman could have perhaps won 9 Olympias and did not have to share the record of 8 wins with Lee Haney. Some food for thought.